The primary source of #information that the #people of West have for gaining information about Islam is Western media. Both the print and electronic media of West is what provides information to the people about Islam and it is the #biasness of this media that the people of the West have a negative perception of Islam and they see it as a religion of oppression and #aggression.
One of the major things that Islam is accused of in the Western world is the oppression of freedom of speech. West proclaims to be the proponent and the emblem bearer of freedom of speech, whereas it regards Islam as a religion where the followers have no say whatsoever and they cannot raise their voice against anything. 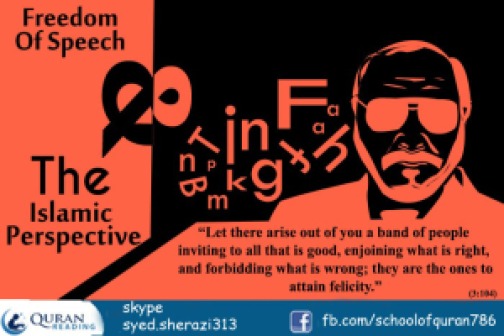 The Islamic opinion about the freedom of speech will be discussed in later part of the writing however, the thing that needs to be addressed first is the Western view of freedom of speech and how it contradicts with it.
Western View:
The West is the proponent of freedom of speech where the individuals in a society are free to express their opinion in any way they want against or for anyone they want. Although this type of freedom cannot exist in world because such a freedom would result in nothing but people defaming each other, spreading slanders and falsely accusing each other. Therefore, in the Western law, despite all the freedom, the limit of it is set that it does not result in hurting the feeling of anyone or that harms the image of some other person.
Contradiction:
The West speaks of freedom of speech without any boundaries, however, it shows biasness towards certain matters and for them it has made laws, whereas, when it comes to other social systems in the world like Islam, they judge it and defame it for the limits it has put on its followers. Some major contradiction of the West pertaining to the freedom of speech it so claims are as follows:

The above arguments show that the West speaks of freedom of speech without any constraints, however, when it comes to certain matters and issue, there is no freedom of speech whatsoever and there are strict limitations.
Islamic Perspective:
#Islam is a #religion of moderation and human connection. It does not allow anything that is extreme or that tarnishes the human connection. Islam allows its followers to speak freely and in some cases it stresses upon them to speak without any fear, however, when it comes to speech hurting the feelings or beliefs of someone, Islam tells it followers to refrain from it and adopt a way that is more subtle.  Some examples of how Islam views freedom of speech and to what extent does it allows Muslims to proclaim their opinion are as follows:
Prophet Muhammad (PBUH) said in a hadith:
“The master of martyrs is Hamza bin Abdul Muttalib and a man who stood up to an oppressive ruler, ordered him (to do good) and forbade him (from doing evil) and was killed by him.”
The #hadith shows that when it comes to #speaking freely, the allowed speech is that which encourages or promotes goodness and that forbids evil. Therefore, Muslims are to raise their voices without any fear if they see anything bad happening and they should also encourage or support goodness with their voice.
Harun-ul-Rashid was one of the #Muslim caliphs who rewarded scholars who would go out and spread the message of Islam and give people an understanding of deen. Therefore, speech for the sake of spreading of knowledge is also allowed and encouraged in Islam.
Thirdly, on contrary to the Western world where freedom of speech is allowed when it comes to hurting the feelings of the Muslims, Islam forbids any act that hurts the feeling of the non-Muslims living in the Muslims reign. Regarding this, #Prophet Muhammad (PBUH) said in one of His hadiths:
“Whoever hurts a non-Muslim citizen of an Islamic state hurts me, and he who hurts me annoys Allah.” (Bukhari )
From the hadith it is clear that in Islam any proclamation of speech that is against any religion or that hurts the feeling of a non-Muslim is not allowed in Islam. Therefore, the notion that Islam or Muslims somehow are in opposition of non-Muslims or they go to any measures to defame other religions is wrong, rather Islam wants Muslims to accept that other people have their religion and there is no need of turning towards hurtful speech as a means of spreading Islam.
Conclusion:
Ina  nutshell, there is no such thing as an ideal freedom of speech in the world and if West does preach any it is limited and wherever it conflicts with the great scheme the right of speech is taken back from the respective people. Islam encourages a speech that is in favor of good and that detests bad, however, even then the speech is supposed to be free from any hate and resentfulness.

9 Things to Do On Friday

Significance of Offering The Isha Prayer and Its Benefits

Be Mindful of Allah, And Allah will Protect You

How to Prepare for the Day of Judgment