Ramadan is the most auspicious time of the year in Islamic Calendar, which comes up with an opportunity for the believers to set their lives back on the right track of righteousness. It is because of barakah (blessing) of this holy month that Muslims all over the world suddenly start praying, learn Quran and carry out other good deeds while fasting. It is also believed according to the Prophetic (PBUH) traditions that major Shaitaan (Satan) are blocked from harming conscious of individuals during Ramadan.

“When the month of Ramadan starts, the gates of the heaven are opened and the gates of Hell are closed and the devils are chained.” (Bukhari and Muslim)

The above mentioned Hadith suggests that with the start of this sacred period of time, gates of Jannah (Paradise) are unlocked while those of Jahannam (Hell) are locked along with fastening of the evil spirits. Most of the people argue that if Shaitaan are shackled for the duration of Ramadan, then why Muslims still commit wrongdoings. It is because context of the aforementioned Saying of Hazrat Muhammad ﷺ is misinterpreted. Locking down the devils here means that their influence on a common person is not that much effective in Ramadan as it happens to be in normal days. It is the same reason why all of sudden, Muslims are routinely attracted towards morality and uprightness in this month as compared to others. 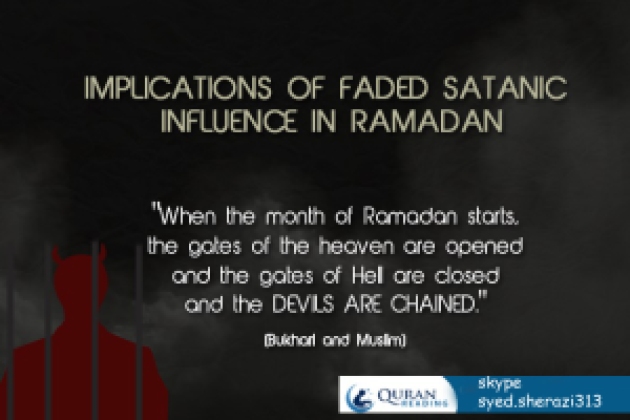 In order to better understand this concept, let us discuss it further in the light of the Holy Quran and Ahadiths.
Ability to Choose between Right and Wrong
Although, manipulation power of the Lucifer is weaken for the period of Ramadan, but it does not mean that one would automatically get rid of all evils. Allah SWT has placed enough consciousness in an individual`s mind to let it choose between the right and the wrong. That is why the Almighty Lord says in His Consecrated Scripture:

“For each one of you, are successive [angels] before and behind him who protect him by the decree of Allah. Indeed, Allah will not change the condition of a people until they change what is in themselves. And when Allah intends for a people ill, there is no repelling it. And there is not for them besides Him any patron.” [Quran, 13: 11]

This Ayah Kareem clearly indicates that the Creator of the universe has awarded every human being with sufficient willpower and awareness to select the right path. It is up to us how well we utilize our intelligence and embrace the righteousness. Due to our ill routine during other months of the year, we are not always able to live up to the true spirit of Ramadan. That is the reason why our inner self is easily diverted towards immorality and forbidden acts even during Ramadan.
Weaker Authority of Satan
When a country enlarges its security within the city to restrict possibility of potential robberies; it will apparently bring about a decrease of theft in the town. However, some expert and tough burglars will still squeeze through and continue with their unlawful activities; though in a much less effective way than before. Same is the case with Shaitaan, who as compared to great restrictions, can still manage to deceive us in a constrained style.

It means that in ordinary days of the year, Satan is as close to us as circulating blood in our body. But on the other hand, in Ramadan, it is not that nearer that is why its influence is weakened which results in more piety and carrying out of religious actions. But its swaying impulse still can mislead us from the way of righteousness in less effectual way.
Taking Help from Quran and Prostration
Believing in fact that a Muslim can still be influenced by bad side of its nature in Ramadan, we can take help from reading Quran and prostration (Sajdah) in order to get rid of satanic power. Uthman ibn Abi al-’Aas (R.A) narrated the Holy Prophet ﷺ saying as:

This previously stated Hadith tells us the great benefits of reciting the Holy Quran which includes the Verse of Prostration. It leads to one`s falling in Sajdah in front of Allah SWT, which in turn is the resultant of failure of Shaitaan in influencing a believer`s actions as one gets nearer to the Most Merciful.
Seeking Protection of Allah SWT through Prayers
Although Muslims are mostly busy in good deeds during Ramadan, but some of us are still weaker against satanic whispers and lack consistency in upholding decency. That is why the Almighty Lord says in Furqan e Hameed:

“And if an evil suggestion comes to you from Satan, then seek refuge in Allah. Indeed, He is Hearing and Knowing.” [Quran, 7: 200]

It means that whenever one feels being persuaded towards forbidden acts in Ramadan; it should make Dua (Supplication) to the Gracious God to seek His Refuge against the accursed enemy of Muslims.
In short, one is not completely safe from the control of satanic evils and thoughts even in Ramadan rather they are made to have considerably lesser power than in ordinary days. One still ought to protect itself from the influence of Shaitaan through honest efforts. 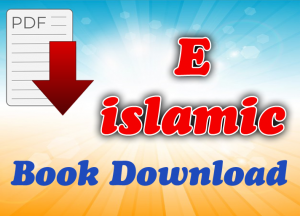