The life of a Muslim on earth is not plain and simple as it has to go through a lot of trials and assessments in the shape of Fitnah (committing sins and transgressions from rightful Islamic way). To be able to succeed both in this world and the hereafter, a believer has to achieve much more than just declaring Iman (Faith) and observing obligatory religious actions. Regarding this sensitive matter, Allah SWT says in the Holy Quran:

[Who say], “Our Lord, let not our hearts deviate after You have guided us and grant us from Yourself mercy. Indeed, You are the Bestower.” [Quran, 3:8]

In the above mentioned Ayah, the Most Merciful directs His servants to adopt the way of His true disciples who always worry about adhering to right track of righteousness and pray to Him for granting calmness of heart and soul.

“The Day when there will not benefit [anyone] wealth or children. But only one who comes to Allah with a sound heart.” [Quran, 26: 88-89]

It shows that the mankind is in constant danger of misguidance and wrongdoing which are the resultants of weakening of human spirit. Therefore, one consistently needs to keep a check on its routine to best feed its soul in the manner that would lead to success in the both worlds. 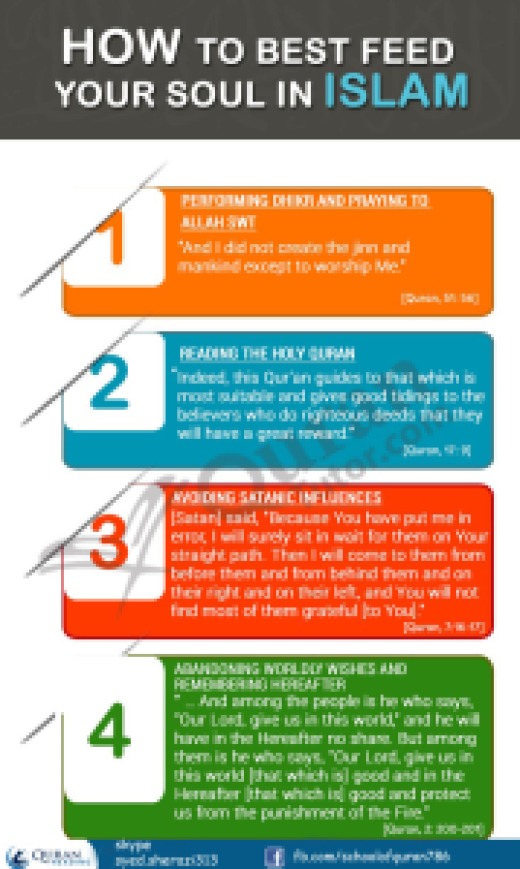 Performing Dhikr and Praying to Allah SWT
The sole purpose of formation of human race by the Creator of the universe is to adore His Name and achieve the due level of uprightness and virtue. As the Almighty Lord says in His Sacred Scripture:

The Exalted One has clearly prescribed humanity the best way to attain His Mercy and Help which lies in His supreme and unparalleled devotion. It means that worshipping God is one of the paramount methods of gaining the suitable degree of one`s purification of soul.

“He has certainly succeeded who purifies himself. And mentions the name of his Lord and prays.” [Quran, 87: 14-15]

These Quranic Verses clearly declare that one has to completely get rid of all sinful impurities present in its soul and return to Allah SWT in a condition of absolute purification of spirit which can be achieved through prayers and His constant memory.
Reading the Holy Quran
The highly blessed Manuscript of Allah SWT, i.e. the Holy Quran is the Final form of revelation that He bestowed upon His Last Messenger, Hazrat Muhammad ﷺ. It contains such teachings and instructions which are great source of enlightenment for the entire world population and not just Muslims. It shows the correct way of living in every aspect of life, thus, leading to ultimate success. The Gracious God says in one the Quranic Ayats:

“Indeed, this Qur’an guides to that which is most suitable and gives good tidings to the believers who do righteous deeds that they will have a great reward.” [Quran, 17: 9]

It means that this Consecrated Volume of Quran is the eventual guideline for humanity and the advocates of Islam to know about the equitable way of existence on earth. Its rightful interpretation and acting upon its lessons are the immense means of achieving goodness of soul and receiving countless blessings from the Almighty Lord.
Avoiding Satanic Influences
Shaitan is considered to be the biggest enemy of a Muslim. It constantly examines and tests the human heart through its misleading whispers forcing one to leave the way of righteousness and indulge in Allah`s insubordination. It tries its level best to misguide believers through showing them many of the worldly pleasures and enjoyments leading to transgression from the Islamic faith.

[Satan] said, “Because You have put me in error, I will surely sit in wait for them on Your straight path. Then I will come to them from before them and from behind them and on their right and on their left, and You will not find most of them grateful [to You].”[Quran, 7:16-17]

It shows that Allah SWT has given Satan enough power to influence the minds and souls of the disciples of Islam, which in fact is a great means of testing for them in this world. This is the reason why in above stated Verse, the Almighty Lord describes the evil thoughts of Shaitan who has openly challenged to give the servants of God the wrong impression about matters of life through its various tactics. Therefore, one must always keep this grave matter in mind and let the devil not pollute its heart and spirit.
Abandoning Worldly Wishes and Remembering Hereafter
The concept of existence on earth is simple and clear for all the Muslims, i.e. it is a temporary place to live in and that one has to return to the Almighty Lord on the Day of Judgment. Most of the worldly distractions lie in one`s desires to attain more and more assets, money and other such wishes. Allah SWT has described the condition of two kinds of people in the following Quranic Verses:

Those who ask the Exalted One about fulfilling their wants which are related to this world will only benefit from them in this world and will lead to their failure in the hereafter. On the other hand, those who only ask for that is beneficial or Halal in this world and request for success in afterlife will be triumphant in both the worlds. It means that one has to neglect and shun away from all sorts of pleasures and desires while living on earth and always keep in mind the ultimate gains of hereafter in order to maintain the purity of soul and spirit.
In short, the life on earth is full of trials and tests which one has to go through and keep its mind and spirit on the rightful track of the Religion of Peace. To be successful in this endeavor, one has to carry out the above mentioned deeds and many other such actions which would bring it closer to Allah SWT resulting in best feeding its soul.

Top Tips for Becoming Special and Closer to Allah Almighty

How to Convert to Islam for Becoming a Muslim

Islam And Different Types Of Health